The method according to Winkler is the most dispersed and simplest method. With this model, we start with a uniform settlement of the plate. A load F1z will lead to a deformation Dz1, so from this a subsoil constant C1z can be determined: 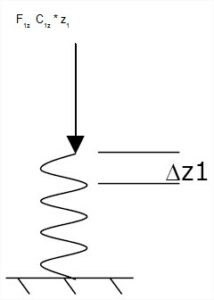 In the literature, information can be retrieved for the calculation of the horizontal bedding parameters C1x and C1y, which can indicate the friction between plate and soil. For normal soil types (this means no rock, peat, …) a guide value of 10% of the vertical stiffness can be taken.

The advantage of this method is that is quite simple. The disadvantage, however, is that in this method the springs under the plate are not coupled. In reality a plate will almost never be put uniformly, but e.g. the deformation will be larger in the centre than on the edges, depending on the load.

In the Pasternak model, the theory according to Winkler is completed with a second constant: C2. In this approach, the springs of a bedding are coupled to each other: the load in a point not only causes a settlement in that point, but also in its environment:

Parameter C2 indicates the influence of the force Fz1 in a different spring in the environment of this force.

It is clear that this method leads to more correct results than the Winkler model, however, the calculation of the C2 parameters is not a simple job. For more information about this model, see literature.

In SCIA Engineer the model according to Pasternak is implemented in the soilin module, at which the subsoil constants from the soil parameters are automatically calculated.

In the literature there are other different methods to calculate the subsoil parameters.

To obtain good results with a rather simple calculation, there is a so-called pseudo-coupled method. In this method the Winkler model is extended so the springs are partially coupled under the plate.

With this method, the plate is divided into several concentric zones: 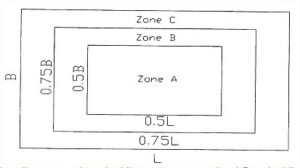 A subsoil constant is attributed to every zone. These subsoil constants are determined from the average bedding constant ks in the center of the plate. As a mutual connection between the different constants, the following expressions apply:

Here Ai represents the surface and ki the subsoil constant of zone i.

The theory of Winkler is used to calculate the average subsoil constant ks in the centre of the plate.

The settlement in the center of the plate can be calculated by means of the settlement law of Terzaghi and for example the triangulation method.

As soon as the subsoil constants are calculated for the different zones, they can be entered in SCIA Engineer as C1z.

The different zones can be simply entered on a plate by means of subregions.